We understand that the COVID-19 global pandemic is a worrying and stressful time for our clients. As the lockdown of large parts of the British economy, school closures, social isolation and distancing measures make their combined effects felt, we know that employers in all of our key sectors are asking themselves whether and how they can mitigate the economic effect of the crisis by reducing their staffing levels.

Last Friday the Chancellor Rishi Sunak announced the Government’s ‘Coronavirus Job Retention Scheme’ to reimburse UK employers of all sizes and in any sector who ‘furlough’ staff (don’t require them to work but keep them on the payroll instead of dismissing them as redundant or putting them on unpaid lay off) 80% of their wage costs up to a cap of £2,500 per worker per month. While this HMRC-operated ‘grant’ scheme may provide some reassurance to employers, the fine details of the scheme’s application and operation are still awaited and the government support may not go far enough for many employers.

In this note we examine the law on contractual variation; we consider the various ways an employer might seek to vary the contracts of its staff and the relevance of the ‘employment status’ of those individuals to any proposed changes. We also consider how the job retention scheme might apply to different categories of staff.

1. ‘Short time’: Reducing the number of hours worked by staff and paid by employer.
2. ‘Unpaid Lay-off’: Enforcing periods of mandatory unpaid leave for staff but not dismissing them.
3. 'Furloughing’: Not requiring staff to work but keeping them on the payroll and paying them – at least some – of their wage.
4. ‘Redundancy’: Dismissing staff due to a reduction in the level of work.

How these four options are each achieved, and the legal risks associated with each method is likely to vary depending on the basis on which any given member of staff is engaged by the employer.

There are a myriad of different terms to describe staff, but broadly speaking the categories are: (1) employee, (2) worker, (3) free-lancer/self-employed contractor, and (4) zero-hours employee or worker.

Of course, much will turn on the specific contractual wording governing the individual’s engagement by the employer, but this briefing note seeks to set out some general principles as to the different approaches that employers may choose to take with its different types of staff.

The table below seeks to summarise the position in respect of each class of worker mentioned below, and the approach to be taken towards their working arrangements. Further details relating to the issues that might be associated with each class of worker are set out in more detail below. 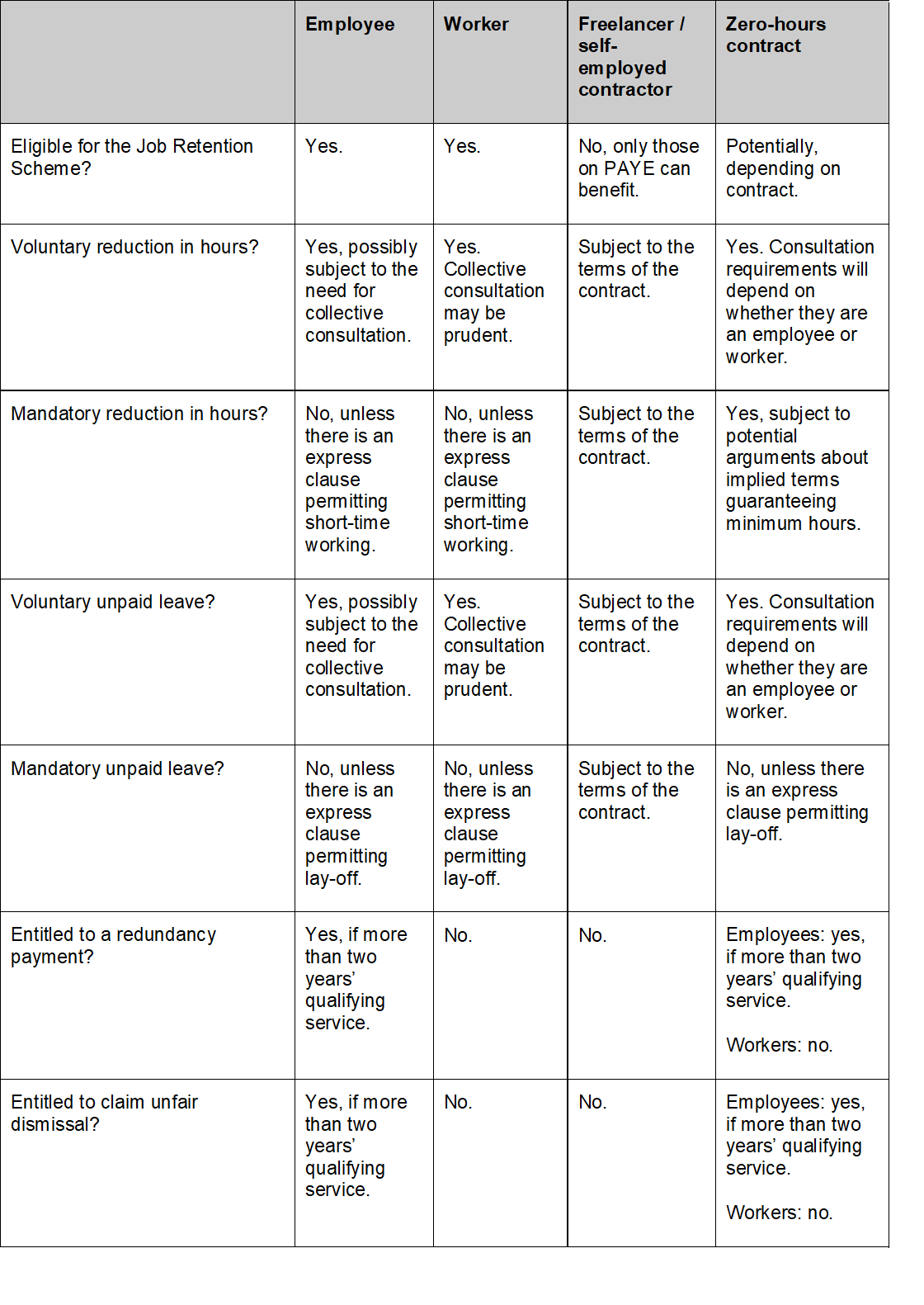 We appreciate that this is a stressful and worrying time for our readers (and for so many), and we do hope that you find the guidance contained in this blog useful. If you are interested in formally engaging the firm and require further tailored advice in relation to what is covered, please contact Katie Fudakowski, Kieran Wilson, or your usual contact at the firm on +44 (0)20 3375 7000.

Please note that our Employment team is currently experiencing a very high volume of queries in light of the COVID-19 outbreak, which unfortunately means that we are unlikely to be able to respond to informal queries of a more general nature, given the need to prioritise urgent queries from existing or new clients. We hope this blog is, however, helpful in addressing some of those more general queries.

Have an enquiry? Send us an email.