We reported in June 2018 that the Charity Commission was consulting on draft guidance concerning the relationships that charities have with non-charitable organisations. For these purposes, “non-charitable” means both entities established in England & Wales that are for profit or otherwise not charitable (such as most charity trading subsidiaries) as well as overseas entities that might be “charitable” according to their own domestic law but do not qualify as such for English legal purposes (for example, s.501(c)(3) non-profit organisations in the USA).

The Commission has now published its final guidance. We are pleased that many of the comments that we raised (as part of the Charity Law Association working party) have been addressed. However, the guidance is still hard to navigate and, in our view, tries to cover too many different issues and types of charity relationships.

By way of example, the guidance could apply to your charity if:

The guidance largely consolidates existing information, rather than introducing new legal requirements. It sets out six key principles that a charity should consider when it has a connection to a non-charity, which are illustrated in below: 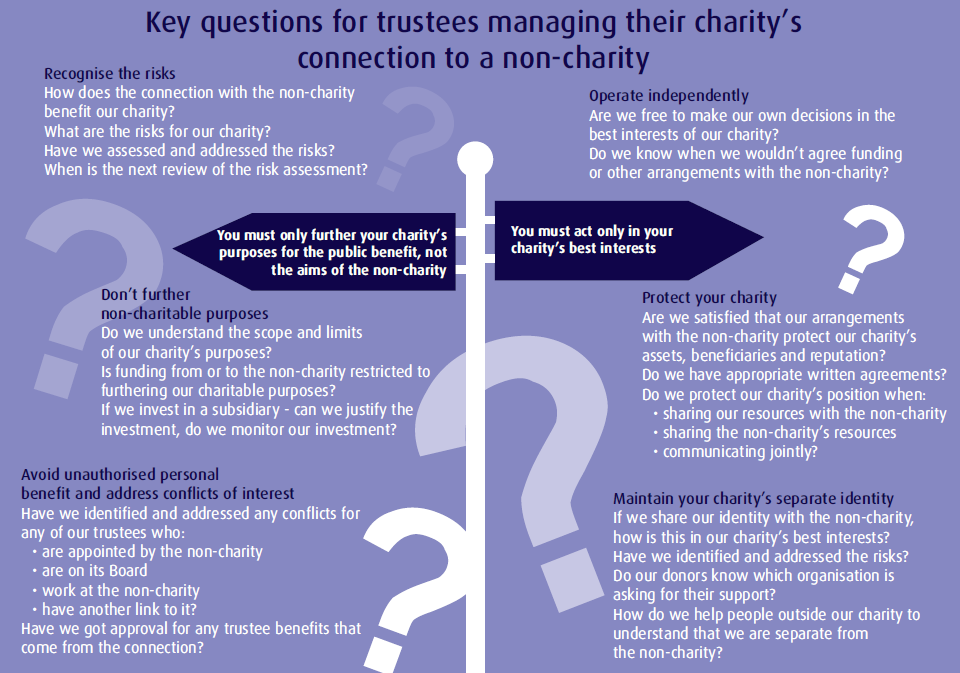 Importantly, the Commission has retained its expectation that any charity which has a connection with a non-charity to which the guidance applies will have considered and applied the principles the guidance contains. If a charity decides not to follow the principles, the Commission will expect it to be able to explain and justify its approach. Charity trustees should therefore determine whether the guidance is relevant to their charity and, if so, review their relationship with the non-charity in light of the guidance.

Apparently taking on board feedback as to the extremely wide range of relationships that could be caught by the guidance, the Commission has set out a list of situations to which the guidance is not intended to apply:

The Commission has created three checklists to assist charities in reviewing the main types of relationships with non-charities. These are designed to be used:

Lastly, it is important to note that the guidance sets out a number of best practice expectations of charity trustees. In particular it suggests that charities should periodically review the connection between the charity and the non-charity and where a higher degree of money or risk is involved in the relationship this connection should be reviewed at least once a year.

Because of the wide range of charities likely to be caught by this guidance and the complexity of some of the arrangements with non-charities, some charities will inevitably need help from their professional advisers on how best to apply the guidance in their particular circumstances. For those for whom compliance is easier, we recommend that charity trustees ensure their reviews of the arrangements are properly evidenced and recorded so that they can be produced to the Commission if necessary.

If you require further information about anything covered in this briefing, please contact your usual contact at the firm on +44 (0)20 3375 7000.