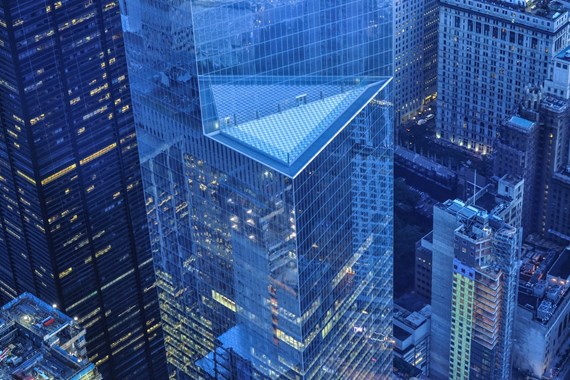 There have been proposals by both HMT and FCA to overhaul aspects of the UK’s financial promotion regime recently. HMT has consulted on its proposed reform of financial promotion exemptions for high net worth individuals and sophisticated investors in a response to the FCA’s call for a review of the exemptions in its September 2020 Call for Input and re-iterated this call in its 20/21 Perimeter Report. The FCA itself is also consulting on strengthening its financial promotion rules in relation to high-risk investments in CP22/2. In this briefing, we examine both consultations, the proposed reforms and the impact of such proposals.

The UK’s approach to the regulation of financial services recognises the importance of enabling financial services firms to promote their products and services, but also the risks that can arise from misleading, inaccurate or unsuitable promotions. As a result, financial promotions are subject to regulatory safeguards which are intended to ensure that consumers are provided with clear and accurate information that enables them to make informed and appropriate decisions. This means that financial promotions must in general be either issued by an authorised person or approved by them. However, there are a number of exemptions set out in the Financial Promotions Order (FPO), which allow unauthorised persons to communicate financial promotions. Several of the exemptions (investor status exemptions), as set out below, were introduced to allow small and medium enterprises (SMEs) to raise finance from sophisticated private investors without having to incur the cost of complying with the financial promotion regime.

It is over 20 years since the above exemptions were introduced, (and 15 years since they were last reviewed), and there have been many changes in the meantime relevant to the context in which the investor exemptions operate. For example, as a result of the effect of price inflation and pension freedoms a far greater number of consumers now technically fall within scope of the high net-worth exemption, than would have done so when it were originally envisaged.

In addition, HMT has been made aware that the exemptions are being misused, for example as set out in Treasury Select Committee's report on the failure of London Capital & Finance plc. The FCA has also highlighted the potential misuse of these exemptions to HMT in its Call for Input and 20/21 Perimeter Report.

As a result of these concerns HMT has issued its consultation on the exemptions set out in the FPO.

HMT Proposals for reform to the Financial Promotions Regime

The promotion of collective investment schemes (CIS) is subject to particular rules. Where the CIS is promoted by a person who is not authorised under FSMA s.21 applies, for authorised persons a separate restriction in s238 FSMA applies, which prohibits an authorised person communicating a financial promotion in respect of a CIS unless:

For further information on the FCA’s proposed changes to its rules and guidance on the financial promotions please see below.

It is also worth noting that the government has committed to a consultation on potential changes to the UK’s regime for overseas firms and it is expected that a consultation will be published later this year.

Wider Impact of HMT’s proposed changes to the FPO regime

It is worth noting that changes proposed to the regime will have knock on effects beyond the exemptions specifically identified in the FPO and PCIS, including in the context of similar exemptions in the FCA handbook for Non-Mainstream Pooled Investments.

Non-Mainstream Pooled Investments (NMPI) include unregulated CIS, and similar high-risk investments such as options and contracts for difference. The current FCA Handbook rules prohibit the promotion of these products to ordinary retail clients, however there are exemptions for the promotion on NMPI to certain types of investors (set out in COBS 4.12R) including:

These NMPI investor exemptions piggyback on the FPO and extend the PCIS exemptions discussed above. While the HMT consultation addressed the promotion of unregulated CIS and the HMT’s proposed reform to the FPO and PCIS regime will feed through to the promotion of unregulated CIS, the HMT proposals do not specifically address other high-risk investments. However, these investments and additional changes to promotion of collective investment schemes are addressed by the FCA them in CP22/2 Strengthening our financial promotion rules for high risk investments, including cryptoassets, which is discussed below and which have potentially significant consequences for firms.

Responsibility for the regulation of financial promotions in the UK is distributed between HMT, which is responsible for legislative restrictions as set out in FSMA and delegated legislation and the FCA, which is responsible for more specific rules for firms that are made, supervised and enforced by the FCA. Therefore, while the FCA has the power to consult on changes to its rules and guidance, changes to the legislation underpinning the financial promotion regime fall to HMT as such changes involve changes to either FSMA or the secondary legislation made under it.

Amending the classification of high‑risk investments

The FCA notes that firms find existing marketing rules difficult to navigate and, in an attempt, to clarify its rules it intends to introduce new definitions for types of investments in COBS 4 under the terms “Restricted Mass Market Investments” and “Non‑Mass Market Investments”. The proposal is that all investments would be classified into one of three categories and that marketing restrictions would depend on which of the three categories the investment fell into. We set out these categories and the new acronyms below. 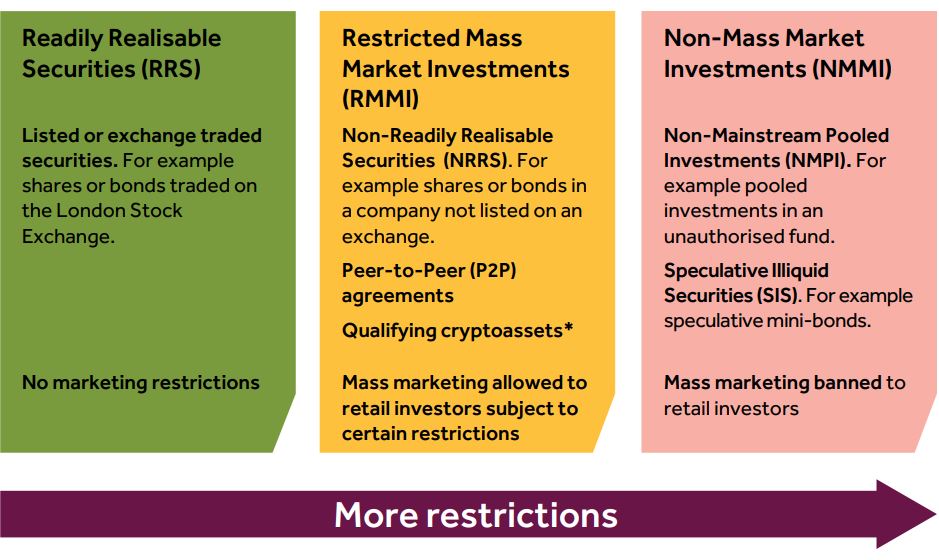 Readily Realisable Securities (RRS) such as listed shares or bonds would be capable of being promoted without restriction in line with the FCA handbook rules as these investments are regarded by the FCA to have sufficient liquidity and transparency as a consequence of their being listed.

The FCA has also taken the opportunity to set out proposals for extending its financial promotion regime to cryptoassets in CP22/2. Following an HMT consultation on cryptoassets in 2020, in January 2022 HMT confirmed that it would extend the statutory basis of the financial promotion regime to cover promotions of “qualifying cryptoassets”. The scope of “qualifying cryptoassets” in the HMT consultation response is any cryptographically secured digital representation of value or contractual rights which is fungible and transferable. HMT intends to exclude from this definition other controlled investments, including electronic money under the Electronic Money Regulations 2011, and cryptoassets that are only transferable to one or more vendors, or merchants in payment for goods or services. It is worth noting that the FCA is consulting on the basis of HMT’s proposed definition as set out in its consultation response, but this proposed scope may change as HMT lays the relevant statutory instrument before Parliament.

The FCA currently intends to treat qualifying cryptoassets as RMMI, as it aims to strike a balance between the risk profile of such investments and the need to encourage and not stifle the development of innovation which it believes may benefit consumers.

The consumer journey into high‑risk investments

The FCA is also concerned that too many consumers are just “clicking through” and accessing high‑risk investments without understanding the risks involved. The FCA’s existing marketing restrictions are intended to ensure consumers only access high‑risk investments knowingly. However, the FCA has conducted consumer research which demonstrates various weaknesses in this approach.

Therefore, the FCA is proposing a package of measures including:

Strengthen the role of firms approving and communicating financial promotions

Following confirmation by the government that it intends to legislate to introduce a new regulatory gateway under s21 FSMA for authorised firms that approve promotions for other unauthorised firms. The FCA believes that such s21 approvers play an important role in enabling unauthorised issuers of high‑risk investments to reach consumers. The FCA intend to develop a robust regime to complement the proposed s21 gateway which, when implemented, will hold s21 approvers to high standards. This will ensure approving firms have the relevant expertise in the promotions they approve and the overall quality of financial promotions in the market is high. The FCA intends to consult on draft guidance for the proposed s21 gateway and the approver regime once the legislation has been published.

Naturally both sets of proposals to reform the financial promotion regime will impact on firms. The HMT’s proposed increase in the thresholds for high net worth and sophisticated investors will filter through to the FCA’s NMPI rules and may reduce the pool of available investors for SMEs and certain high-risk investments. The proposal by the HMT (and flagged by the FCA) that firms should hold a reasonable belief that the investor meets the necessary criteria to be classified as a high net worth individual or sophisticated investor will require firms to review their client relationship processes and procedures and determine how such a belief can be reached and recorded by the firm.

In terms of the FCA proposals in particular, firms will need to consider the implications of the revised classification of investments. The FCA intends the introduction of three categories of investments to simplify the financial promotions regime and to enable firms to navigate the regime more easily. However, it will require resources and training for firms to ensure that they understand the new categorisation and to map each of their investments appropriately. It is also worth noting that while the FCA intends to classify “qualifying cryptoassets” as RMMI, this categorisation is dependent on the HMT amending the Financial Promotion Order.

The proposed changes to the consumer journey for RMMI and NMMI will also require some firms to review and reconsider the structure of their websites. Firms will need to ensure that their IT systems and staff are appropriately trained to deal with such requirements.

Conclusion and next steps

Clearly the consultations by HMT and the FCA on the reform of the financial promotion rules are designed to strengthen consumer protection for retail investors. Given the lapse of time since the some of the thresholds were last reviewed, the review is perhaps overdue. In relation to the FCA’s approach the proposed changes are further evidence of a shift in the FCA’s regulatory tone, which is particularly brought out in the FCA’s statement in relation to the self-certification of high net worth or sophisticated investor status that “self‑certification is fundamentally not the right approach, given the potential for consumers to incorrectly self‑certify or bad actors to exploit consumers". However, the FCA is determined to balance consumers access to innovative financial products, so the proposed changes do not prohibit the promotion of high risk investments to individual investors. While the proposed reforms will have implementation costs for affected firms, there is also potential that the financial promotion process will be simplified with the introduction of additional terms which will allow firms to navigate financial promotion rules more easily. Clearer financial promotion rules with greater safeguards for consumers may also lead to less complaints.

The HMT consultation closes on 9 March 2022. Feedback to the FCA consultation ends on 23 March 2022 and the FCA intends to publish a policy statement and final handbook rules in summer 2022.

If you require further information about anything covered in this briefing, please contact Grania Baird, Andy Peterkin, Fiona Lowrie or your usual contact at the firm on +44 (0)20 3375 7000. 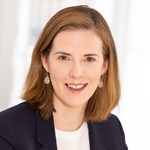