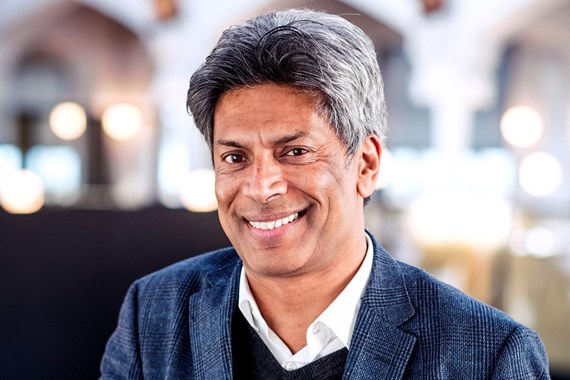 You said to me when we met that you do not consider your restaurants to be “luxury”, although they are “luxurious” in the quality of food, location and décor. Your restaurants therefore appeal to a wide variety of people for a range of different reasons and occasions. What are some of the most important factors to you when considering opening a new restaurant?

We always start our thoughts about a restaurant from the site, and we like to secure amazing sites, either because of their inherent character and history (eg German Gymnasium) or their location (eg 14 Hills with its views over london). We then think about the atmosphere, crowd and vibe. Only after this do we think about chefs, menus, bars, wine lists etc. And our thoughts on each of these details will depend on the people involved. The menu at 14 Hills evolved from British to Franco-British because our chef Thomas Piat who is French (Ex Daniel Boulud, Helene Darroze).

London is now regarded as one of the foodie capitals of the world. That certainly wasn’t the case 20 years ago. In what ways have you seen the London restaurant scene mature since your time working in it?

20 years ago Jacques Chirac said that the food he ate in Britain was the worst in Europe next to Finland. Now, as you say, London is one of the best cities in the world for restaurants. Why? Because Londoners have become enthusiastic foodies and eating out has become part of everyday life, not just an occasional luxury. Also with London and the UK being great to live and work in, chefs and restaurateurs have flocked to the UK to work in and open exciting restaurants.

We are sitting in your new restaurant, 14 Hills, a beautifully decorated space that resonates perfectly with London’s largest public roof garden situated above it. The ambience and space of your restaurants contribute a large part to the customer experience (for example, German Gymnasium, another of your restaurants). Has the challenge of finding suitable property in London intensified in recent years?

We haven't found that at all. London and other UK cities are continuing to be developed with new neighbourhoods being created. Increasingly property owners see restaurants as being an important element of these new neighbourhoods. Kings Cross, Battersea Power Station and Television Centre White City - in each of which we have opened restaurants - are all examples of this. Also currently swathes of retail on high streets and in shopping centres are being converted to alternative uses, including restaurants. In summary there are more property opportunities than ever...certainly for restaurants like ours.

You said that people get bored of brands. This, you told me, is partly why each of your restaurants is unique, with its own character and personality. Quality is reflected throughout, rather than just in the food. This undoubtedly puts you in strong stead in a highly competitive market where so many of your competitors are failing. D&D has remarkably never had to close down one of its restaurants. What other reasons do you contribute to your success?

We have sold restaurants or surrendered leases at the end of their terms, but we’ve never had to close a restaurant because it was performing badly. One of the big reasons for that is that if a venue is failing we don’t give up on it, instead we evolve it, make changes etc. Until it becomes successful. restaurants are not just about concepts, menus and beautiful rooms. They are about great staff and management teams looking after their customers every day.

Can you explain your refreshing philosophy on how you approach the hotel market?

Hoteliers tend to see hotels as businesses built to maximise room numbers and revenue yields. Restaurants and bars are seen as necessary services but of secondary importance. We see hotels as places where eating, drinking and relaxing in the public areas are as important as sleeping in bedrooms. Hotels should be venues for people to meet eat and drink - not just sleep. At South Place Hotel around 80 guests sleep in our bedrooms each night. Ten times as many use our bars and restaurants every day!

With the rise of veganism, tee-totallers and the importance consumers now place on sustainability, has this had an effect on your strategy as a business?

Sustainability in terms of sourcing food and minimising waste and energy usage has been pretty central to how we manage our business for a number of years. The increase in demand for vegan food and low/zero alcohol drinks is more recent and yes of course we are reacting accordingly. Most of our restaurants have at least 20 per cent vegan dishes on the menu. And our bar lists do have lots of low/zero alcohol options. However our take up has been less than expected. I suspect this is because when customers go for dinner at Le Pont de la Tour or Launceston Place, it’s a special occasion and so choose to indulge even if in their everyday lives they've decided to eat less meat and drink less wine.

With 31 January 2020 and, along with it, our membership of the European Union now behind us, how has the Brexit debate affected your business and what impact do you anticipate it having going forward?

Most important for us in the short term is that Brexit gives a boost not an adverse bump to the economy. Eating out for both companies and individuals is affected by their confidence. In the long term, of course, the ability for European staff, both skilled and unskilled, to work in the UK will have a big impact on the restaurant business. I don’t think anyone in their right mind would want the UK to return to the time when we were amongst the worst, not best in the world, for restaurants -except perhaps the French! We are however confident that Brexit will work out ok. That’s why we announced two big restaurant openings earlier this month, one in London and one in Birmingham.

What is the decision process when choosing the names of your restaurants?

We ask our staff for suggestions and then opt for the best. We tend to choose names which have a connection to the building or location, but we occasionally like to throw a bit of a curve ball to those who like to rationalise names eg20 stories in Manchester is actually on the 19th storey. And there are more than 14 hills you can view from our restaurant- even though it is located on the 14th storey!

D&D has opened a number of regional and international restaurants, including in Manchester, New York and Paris. Each city has their own personality and customs which play a factor in the choices you make when deciding to open outside of London. 2020 also sees D&D opening a restaurant in Bristol. What challenges are faced when breaking into a new city and what were the opportunities that, for you, outweighed them?

The challenges are mainly around making the changes needed to adapt to how customers eat out in different countries and cities. But that’s also the fun. And absorbing new ideas I’m sure makes us better and more exciting restaurateurs. In choosing where to go the two main questions for us are - do we think we can be successful long term in that city and is the site one of the best available?

Your restaurants are run with the ethos of flexibility and entrepreneurialism at their heart, allowing important decisions to be taken by those “on the ground” rather than by a head office. Was this a conscious decision from the outset and do you think this has helped you attract the top talent that works for you?

This philosophy has absolutely been core to how we run our company since day one. And yes of course, it is one of the main reasons that we have so many talented people in our business.