Taking part: facts on the ground

In all, 17 UK women won a gold medal, as individuals or as a team, including some of Team GB’s most high-profile wins. There was extensive media coverage to match the medal tally. But, despite the new promise for women in sport, the gender “participation gap” persisted; huge gaps between male and female participation, to the tune of two million, were recorded in 2014.

In 2015, the “Understanding Women’s Lives” report was published by the charity Women in Sport. Drawing on Sport England figures, it revealed that 7.1 million women between the ages of 14 and 40 want to take part in more sport or physical activity.

Why were they not taking part in sport to the degree they wanted to – or even at all?

The report explored the idea that many women feel “traditional” sport is not relevant to them, and that gym-based classes and fitness is where most time is spent. It concluded that women’s decision making in this area is informed by a complex value system spanning a range of factors, and that sport needs to adjust the way it engages with women if it is to remove perceived barriers and encourage them to commit their time.

More recent figures from Sport England indicate that its high-profile “This Girl Can” campaign has had a significant impact on the numbers of women participating in sport on a regular basis. In 2016, figures show that 7.2 million women now play sport and undertake regular physical activity, an increase of 250,000 from when the campaign began.

At this time, Sport England put the “participation gap” at some 1.55 million, rather than the two million figure recorded two years before. The successful “This Girl Can” campaign is now entering its third phase. This phase seeks to respond to the fact that 40% of women aged 16 and over are not active enough to get the full health benefits of sport and physical activity, compared to 35% of men.

Sport England has made reaching out to women of all backgrounds and ethnicities the focus of this stage. The intention is to make the original campaign as inclusive as possible. One particular aim is to increase participation among women doing routine, lower-paid work. This group is more than twice as likely to be “inactive”.

The London 2012 Olympics was widely seen as a turning point for women’s sport, promising a “sporting legacy for all”. 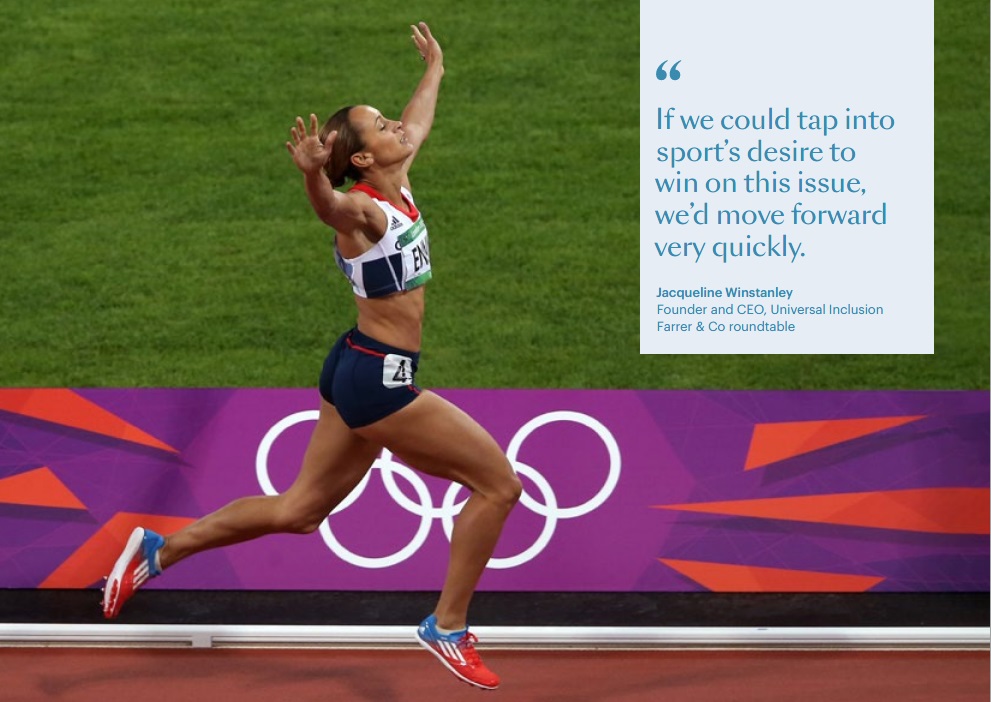 Developments in the world of commercial sponsorship are also benefitting efforts to encourage more women to participate in sports at a grassroots level. Here, as on so many counts, football is a bellwether for UK sport. As part of Barclays’ sponsorship of the Women’s Super League, the brand will work together with the Football Association to drive the growth of the women’s game.

Barclays will be the lead partner of The FA Girls’ Football School Partnerships, a nationwide scheme to help develop girls’ access to football at school. The brand will also work with The FA and The Youth Sport Trust to support the development and delivery of 100 Girls’ Football School Partnerships.
More widely in football, The FA has been working on its four-year “Gameplan for Growth” since 2017. The Gameplan aims to double the number of players and fans in women’s football.

The strategy covers participation, awareness, performance, coaching, and the success of the national team. One year in, The FA was able to demonstrate it was hitting interim targets to achieve its goals.
There have also been noteworthy developments on the world stage. In October 2018, FIFA launched its first-ever global strategy for women’s football, with which it said the women’s game was a top priority.

With this strategy, FIFA aims to work with 211 member associations around the world to increase grassroots participation, enhance the commercial value of the women’s game, and strengthen the structures in women’s football to make success sustainable.

The approach taken both by The FA and FIFA implies that success will come as a result of combined improvements at grassroots level elite performance, boosts to commercial revenue and better structures and governance.

Learning from the best

In promoting, securing and sustaining women’s participation as a specific aim, sport’s governing bodies and clubs are not starting from scratch.

Each sport is at a different stage of development, and the context in which each operates and makes plans varies considerably.

Spectator, supporter, funding and sponsorship levels are also very different for each. These differences notwithstanding, some sports’ strategies on women’s and girls’ participation and leadership are far enough advanced for lessons to be learned for themselves and others.

The picture that emerges from football and rugby, set out here by those charged with delivering on these sports’ plans, is of a relationship between elite sporting success – reflected in media attention – and grassroots interest in taking part. That success demonstrates the existence of a previously untapped audience and commercial interest, which can both be used to build up the infrastructure and playing opportunities that support women’s participation.

That virtuous circle, though, does not complete itself. Diversity and equality in sports governance and leadership plays a part in getting results, a topic to which we return in part.

In addition, we should consider the role of the rewards available to players and athletes. Prize money in women’s football has increased significantly over recent years: the total pot in 2019 was $30 million dollars compared to some $6 million in 2007. This is still nowhere near the figures offered in the men’s game. Prize money for the last men’s World Cup was around ten times that of the Women’s World Cup.

Research from the BBC cited in a European Parliament report in March 2019 indicated that a total of 83% of sports now award men and women equal prize money, which is an increase of a considerable margin on the figure of 70% recorded in 2014. That said, there are still huge salary disparities within some sports.

The report references a 2017 global sports salary survey that revealed the combined salaries paid to women’s leagues in the seven top-division football competitions in France, Germany, England, the US, Sweden, Australia, and Mexico (which included 81 teams and 1,693 players) were less than the £32.9 million earned by Brazilian forward Neymar for his playing contract for Paris Saint-Germain in 2017-2018.

The combined salaries paid to women’s leagues in the seven top-division football competitions in France, Germany, England, the US, Sweden, Australia and Mexico were less than the £32.9 million earned by Brazilian forward Neymar for his playing contract for Paris Saint-Germain in 2017-2018.

The issue of equal pay for men and women is a hot topic. In 2019, the US women’s soccer team launched a claim for discrimination for unequal pay, and over the years, a number of women’s national football teams including Ireland, Scotland, Denmark, and Nigeria have publicly raised issues regarding their pay and conditions. In Norway, by way of contrast, men and women have received the same pay for representing their country since 2017.

As each sport aims to build better participation and better rewards for women, they have an eye on the “sustainability” of each step. Proper rewards are recognised as making participation more sustainable for players, any reverses or backward steps would clearly be hugely damaging for the image and morale of a sport.

Our contributors in this section ask important questions: What is the right measure of success for women’s sport? Is it participation? Prizes and rewards for its elite players? And does equal standing for women in a sport look like a carbon copy of the men’s game?

We can help your board perform better

If you strive to grow the women’s game as part of your strategy and plan for the future growth of female participation, then our specialists can help. We can advise on your governance, commercial, employment and reputational needs in this regard.

Please get in touch if you would like to talk through any challenges you are facing - we would be happy to help.

If you have any questions about the content of our paper or would like to receive a hard copy, then please get in touch at [email protected] 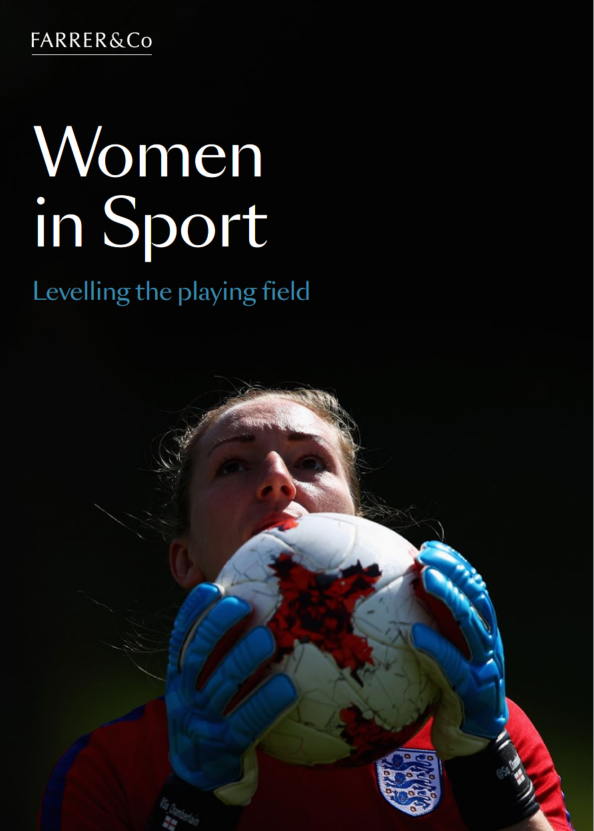