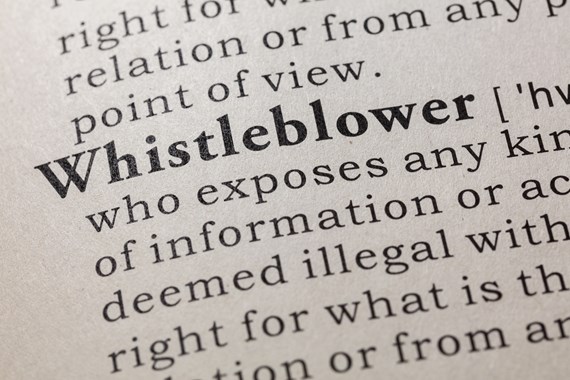 Watching the (astonishingly addictive) Supreme Court livestream last week, I’ve felt pretty proud of lawyers and what they stand for. Granted, greater (or indeed, any) diversity amongst the assembled counsel would have been a vastly better start, but watching the sheer brilliance of Lady Hale (surely the next queen of Netflix) and her colleagues has been a privilege. And the idiosyncratic but ever intelligent, humane and dignified approaches adopted by the assembled barristers, whatever case they’ve been called on to present, has been to me, immensely reassuring in choppy political times. Frankly, it has felt as though the grown-ups have finally entered the building.

Legislative protection and judicial clarity for those who speak up (or out) are also features of the two whistleblowing cases I’m touching on briefly this week.

The first is the first instance employment tribunal case of Bilsborough v Berry Marketing Services Ltd – a case which could prove significant for would-be whistleblowers. Usually, in whistleblowing cases we focus on disclosures which have already taken place – reflecting the past tense language of the relevant legislation (“the worker has made a protected disclosure”). This contrasts the discrimination legislation which talks not only about past acts but also a situation where the employer “believes that an employee has done, or maydo a protected act”. Can that principle transfer into the whistleblowing arena?

Yes, tentatively concluded the Southampton Employment Tribunal in the Bilsborough case (and do remember that this is not a binding decision on other tribunals). The tribunal accepted that to give effect to the Claimant’s right to freedom of expression under Article 10 European Convention on Human Rights, the whistleblowing legislation has to be read to include the situation where an employer subjects a worker to a detriment/dismisses them on the grounds that it believed that the worker had been considering making a protected disclosure. The facts of this case are not wholly straightforward in that Mr Bilsborough had already made a disclosure, but not through the right channels and had been crossly told by his manager to “engage his brain next time”. After that, he angrily told a colleague he would “bring the company down” with the information he had (albeit that by then, the company had started to fix the software issues which were the subject of his complaint, and albeit he later retracted this statement), and started to research via google how to make a disclosure to the ICO. He was subsequently suspended over the “bring the company down” comment – but the suspension letter ill-advisedly linked his suspension to the fact that he had researched ways of making a protected disclosure.

It is worth noting that despite this apparent widening of the gateways, the claimant still lost his unfair dismissal claim – the dismissal was ultimately found to have been because of his threat to damage the company, rather than his research into the protected disclosure. However, the fact that he received a (small) injury to feelings award in relation to the protected disclosure signals a route which the courts may be inclined to explore further in future. The panel accepted that the absence of protection for someone researching how to make a disclosure, even if they chose ultimately not to do so, could have a “chilling effect” on the ability to blow the whistle in relative security.

Reasonable belief that disclosure is in the public interest?

Earlier this month the EAT reaffirmed the position on disclosure in the public interest. In Okwu v Rise Community Action it held that it is sufficient that the employee concerned has a reasonable belief that her disclosure is in the public interest. In this case, the charity indicated it had issues around the performance of Ms Okwu and extended her probation. She then raised concerns around data protection compliance on the part of Rise, and her employment was subsequently terminated, ostensibly on performance grounds. She claimed unfair dismissal on the basis of her protected disclosures.

This is a helpful reminder of where the law stands here – the allegations don’t have to be true, but the employee needs to have had a reasonable belief they were in the public interest. What the case does underline is that the nature of the disclosures is likely to go towards discharging that evidential burden. If, as here, they squarely fit within a legislative framework (in this case the DPA), then even though they related to “personal contractual matters affecting her and nobody else” then the public interest requirement is more likely to be engaged. Clearly, this is only one part of the whistleblowing jigsaw (causation often being the biggest piece), but the case is a quietly useful reminder of where we are on this point.

And so, to end where we started, with our unparalleled judiciary – the Okwu decision is also a characteristically lovely, clear and reasoned judgment from HH Judge Eady QC, one of her last before her elevation to the High Court bench next month. She will be much missed in the EAT, but she and others give me ongoing faith in the calibre of our top judges, and that the rule of law is in safe hands.

If you require further information about anything covered in this blog, please contact Rachel Lewis, or your usual contact at the firm on +44 (0)20 3375 7000.