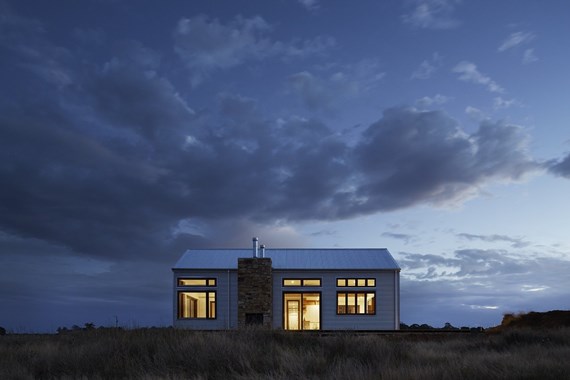 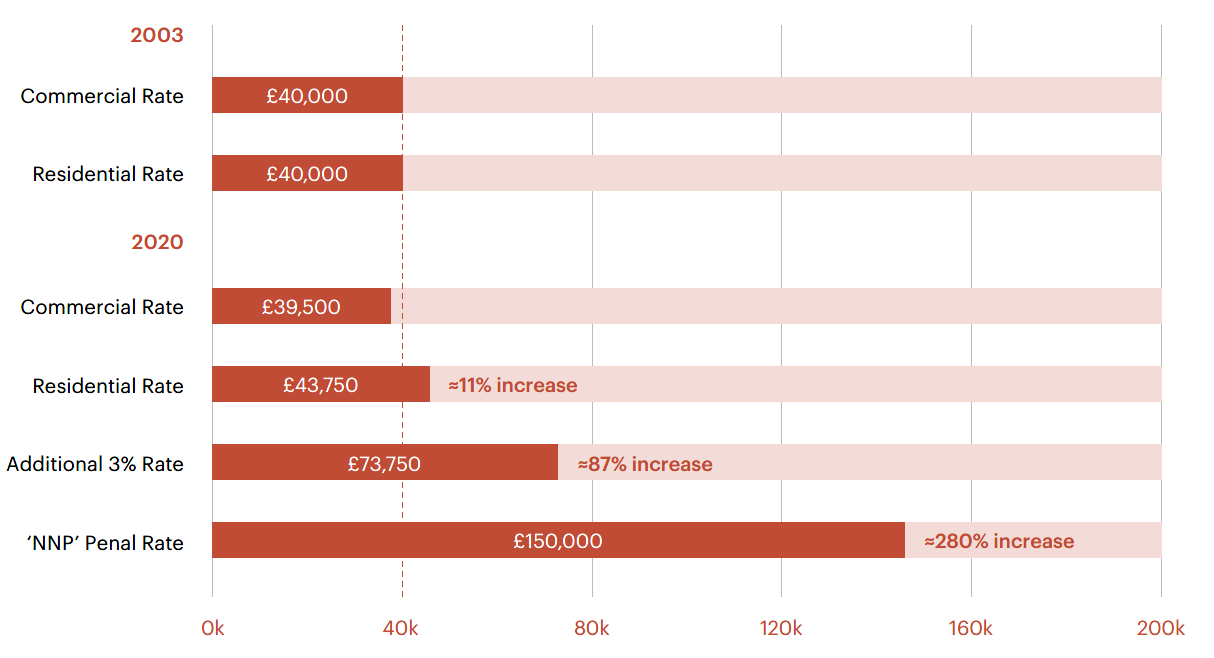 SDLT can therefore have a significant impact on affordability and on the price achieved for a transaction. An outline of two of the more common ways in which to mitigate the effects of SDLT in the context of country home purchases is below.

Mixed use properties qualify for the lower commercial rates of SDLT, which have a maximum rate of 5 per cent. By comparison, the residential rates of SDLT carry a maximum tax rate of 15 per cent. The chart above shows the significance of this distinction on a £1m purchase (with the “non-natural persons” (NNP) rate being the highest current residential SDLT rate).

Recent case law highlights the difficulty purchasers have found establishing mixed use for SDLT in a rural context. The cases all share a similar fact pattern: a valuable country house with adjoining land which purchasers have sought to argue is not residential in nature, such that the purchase as a whole is mixed use (as in Hyman v HMRC [2019], Goodman v HMRC [2020] and Miles-Till v HMRC [2020]). Paddocks, home offices, meadows, bridleways and grazing land have all formed the basis for mixed use claims in these cases.

The purchasers in all these cases have, so far, failed to persuade Tax Tribunals of the merits of their mixed use claims and HMRC has won every case in this area. However, given that these cases all follow a relatively similar fact-pattern, with similar weaknesses, this is perhaps not surprising. Crucially, none of the purchasers in those cases have successfully demonstrated a standalone commercial use of the land in question at completion, such as an arm’s length grazing arrangement, or other commercial agricultural/business use.

HMRC is clearly now closely scrutinising mixed use claims, typically basing their arguments on agent descriptions online and in sales brochures in the first instance. These are often unfavourable in an SDLT context, as these sorts of materials typically emphasise how adjoining land may be enjoyed as one with the house, rather than having a separate commercial function. Purchasers are therefore often starting on the back foot from an SDLT perspective and, so far, have been unable to present sufficient evidence of commercial use to compensate for that. However, with the right advice at an early stage, mixed use claims offer substantial SDLT savings for rural purchases.

As its name suggests, MDR is available wherever a purchase consists of more than one residential dwelling. Claiming the relief can reduce the SDLT payable by up to £86,000 per dwelling.

Tax Tribunals are now beginning to see the first legal challenges to MDR and HMRC has won the first case in this area, Fiander and Brower v HMRC [2020]. The case concerned a large house with an annex linked by a corridor. The purchaser claimed that the annex was a separate dwelling from the main house, on the basis that it had all the usual facilities typically expected of a residential dwelling (its own bedroom, bathroom, kitchen, living area, separate access and postal address). Whilst these factors are all helpful, the Tribunal’s decision turned on the corridor between the annex and the main house, which could be used freely by anyone looking to pass between the two as it had no lockable door. On that basis, the Tribunal agreed with HMRC that the annex could not be regarded as a separate dwelling from the main house, as it could not be occupied privately and separately from the main house.

As with the case law around mixed use, the case highlighted HMRC’s reliance on sales materials prepared by the seller and its agents. The case law therefore highlights the importance of seeking professional advice early on to help manage that position. Query, for example, whether the outcome of Fiander and Brower might have been different if the seller had decided to install a lockable door between the annex and the main house before completion?

HMRC’s success with these cases so far demonstrates the importance of engaging the right professional advisers with the specialist skills and knowledge required to navigate complex areas of SDLT legislation. Given the tax that is often at stake for country home transactions, appropriately qualified professional advice on SDLT is now more valuable than ever.

If you require further information about anything covered in this briefing, please contact James Bromley, Edmund Fetherston-Dilke, Laura Conduit or your usual contact at the firm on +44 (0)20 3375 7000.